A troll, lost in the fog 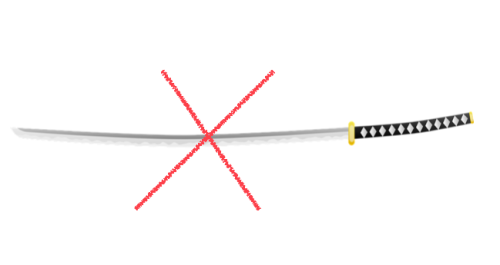 As I was carrying around a samurai sword today, I had a thought.

I looked cool. I looked dangerous. I felt strong. If you displeased me, I would chop off your head.

It wasn’t actually a real sword, but a prop. It was easily the best example to show my students how they can transform you into the character you needed to act in the skits they were writing.

As I went from office to classroom, I passed several teachers. Some were just too tired to notice, some smiled. But one teacher in particular probably went right to the nearest phone to call the police. I don’t think he was the drama teacher.

I walked with my head held high, imagining the blunt blade as actually quite dangerous. I prided myself on finding it and once again believed myself to be a pretty darn good teacher. Modeling a speech or character or way method of doing something is important. It shows your students the high standard you expect from them, and you get to have a little bit of fun in the flow.

But anyway, getting back to my thought.

I imaged that you could visualize one’s intellect as a sword. And if you could, would what shape would it take? Extrapolating from that, you could imagine any object, since we all know that people come in all kinds of intellect. It’s not just polar opposite of smart and not smart, but there’s street smart, math smart, music smart. Ask my friends and they’ll tell you that the one smart I’m particularly lacking is a sense of direction. I actually get lost faster with google maps.

But if you stuck (pardon the pun) to just the sword analogy, you could visualize how sharp your intellect was. Chris Hedges, Jon Stewart, and Neil DeGrasse Tyson come to mind as some of the sharpest blades I know. Like a classic cartoon, you could drop a hair vertically on any of those blades and it would smoothly split in two and slowly drift to the floor.

What object can you imagine his intellect to be? For some followers-on, it is a deadly blade, impossible to blunt, forged in some old master’s workshop kiln deep in the mountains of Japan.

For others, including those in the media, journalists, arts, finance, education, Muslims, gays, women, people who believe water is life, and most people that breathe air, they would say the opposite. Not the sharpest knife in the drawer. A butter knife. A plastic butter knife. An intellect of sporkian proportions.

Since that guilty pleasure is too easy, let’s image a different object.

His incessant distractions and fabrications show up on line, and that qualifies him to be a specific member of the online community. What is the word for someone who is provocative without being productive, for someone that blindly spits vitriol in all caps and is strangely silent when the hammer of truth comes smashing down?

Due to Trump’s inexperience, he honestly does not or has not been able to prove that he knows what path he is putting America on. It is as if he is lost in a fog, without the power of sight, hindsight, foresight, and according to Samantha Bee, eyesight (that’s not true – she merely thinks he can’t read.)

It does not instill confidence having this image in my mind, yet there is no evidence of a more suitable. Jon Oliver has been brilliant at throwing them out, though. My favorite one is of a bag filled with cheeseburgers and Confederate flag belt buckles.

So there you go.